It's been super busy in Marcie-Land as of late and I have definitely fallen a bit off the blogging bandwagon.

My mother always said, "if you don't have anything nice to say, then don't say anything at all." Well, that is not why I have been quiet.  In all actually, I have lots of fun new things to share...but no time to share them.

So today is a little nutshell post about all that has been going on:
OK.  I think you are all caught up.

Happy Reading! Happy Writing!  See you back on the bandwagon Monday.

My 8 year old niece wants to be a writer.
When we talk on the phone she always asks me what I am working on and I ask the same of her.
For my birthday she sent me this gorgeous notepad/folder/clip-board with specific instructions:  the notepad is for your rough drafts, the folder is for your finished drafts and the clipboard is for whatever you are working on.  It made my writer's heart gush a tad.
We are alike in many ways.  Maybe too much alike.
Here's what I mean...
My oldest niece, who is 10, had written a story, as well.  It was quite good and we were all commending her.  Well, apparently my 8 year old niece's ego got a little bruised and in came the self-doubt.  She spent much of the evening laying on her bed, crying out, "I'll never be published!"
Boy, could I relate.
Self-doubt.
We all have it.
"I can't write."  "No one will ever care about this story."  "I'll never be published."
It can be crippling.
Or...it can be motivating.

Age Level: Pay Tribute to the Past, But Write in the Present

We continue our look at 3 contrasts between the Picture Books of our childhood and today's market.
You can read the first installment on Word Count here and the second installment on Conflict Resolution here.

We live in a very competitive, high-paced world.

With the birth of the Common Core State Standards, we look to create kids who are college and/or workplace ready starting in the 3rd grade.

There is a push to have kids reading earlier and reading less for pleasure and more for analysis and information.

Therefore, where do picture books fit in?

Is the solution to have us all start writing non-fiction books or faction?

First, the age level of picture books has been skewing a little lower, with many targeting the 1st and 2nd grade.

Upon researching some of the classic picture books will find the age level at upper 3rd grade and 4th grade.  (for a quick search of word count and age level, check out http://www.renlearn.com/store/quiz_home.asp?c=1)

Also, picture book writers are being forced to leave more and more room for the illustrator, therefore scaling back on language and beefing up the artwork which is a clear indication that books are leaning younger.  So, the emphasis with picture books is on the art...not the story.

Now, in conclusion I want to talk about exceptions.

Let's take a look at "Each Kindness" by Jacqueline Woodson, illustrated by E.B. Lewis.

So, you might see this book on the shelf and argue that everything I have written this week is incorrect.  That there are, in fact, fiction picture books published with over 500 words and that the conflict doesn't always have to be solved by the protagonist and that it can be geared to a older audience.

Here is where some sleuthing should be done.

Who is Jacqueline Woodson?  Who is E.B. Lewis?

Short answer, they are both highly aclaimed award winners with long careers so far.  Woodson has won the Newberry and Lewis won the Caldecott.  Therefore, these are not debut writers and illustrators.  Its harder to break into the business with this kind of a piece.

Who published "Each Kindess"?

Nancy Paulsen books, which is a fairly new imprint of Penguin, meaning that Nancy Paulsen is now able to publish the kinds of books she wants, after a very long career in publishing.  And its also worth noting that Woodson has been published by this imprint before.

Bottomline, the world of books is in an ever-changing flux.

We must be proactive.  We must be readers of the classics, as well as the current lists.  All the while we must be saavy when looking at a book.  There is more story to be told than what is in its pages.

Happy Writing!
Posted by Marcie Colleen at 11:18 AM 6 comments:

Conflict Resolution: Pay Tribute to the Past, But Write in the Present

We continue our look at 3 contrasts between the Picture Books of our childhood and today's market.
You can read the first installment on Word Count here.

The re-telling of classic fairy tales seem to always sells.

Recently Corey Rosen Schwartz's THE THREE NINJA PIGS and Mo Willem's GOLDILOCKS AND THE THREE DINOSAURS have been big hits in the marketplace.  But what of CINDERELLA?

Cinderella is an interesting study because she is a character who does absolutely nothing to better her own situation.

She isn't shown brainstorming how to escape the clutches of her step-mother.  She doesn't make her own dress for the ball.  She doesn't find her own transportation.  She doesn't even look for the prince after the ball...she waits until he knocks on her door! 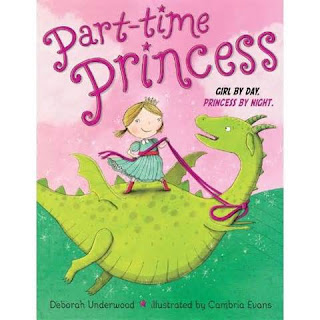 Publishers say they want stories in which the kid protagonist solves his/her own problem.  Having a Fairy Godmother swoop down from the heavens to make everything better is considered a big no!

Instead look to Deborah Underwood's PART-TIME PRINCESS which features a princess who slides down a firepole despite the danger, saves the kingdom from fire-breathing dragons and dances with a prince who she might consider marrying someday, but right now is too busy.

Another example is a book which used to be one of my favorites as a child, A FISH OUT OF WATER by Helen Palmer, illustrated by P.D. Eastman.

A FISH OUT OF WATER is about a little boy who buys a goldfish, and despite a dire warning from Mr. Carp the pet store owner, feeds him way too much.  Therefore, the goldfish grows and grows and grows to epic proportions, finally filling a public swimming pool. 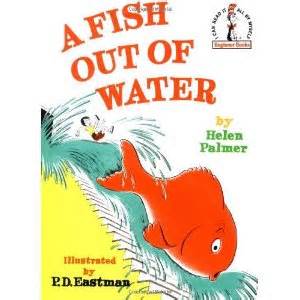 In doing research for a project, I re-visited this book. Basically, I wanted to figure out how the conflict was resolved because I currently have a manuscript in which I have a protagonist in a similar situation and way over his head.

I turned to this classic written in 1961 and was shocked at what I found.

At the climax, the goldfish is the size of a public swimming pool and still growing.  Even the fire department is at a loss of what to do.  The little boy finally calls Mr. Carp.

Mr. Carp shows up with a mysterious black box, some tools and a tiny net.  He dives into the pool and disappears for a bit.  When he finally reappears, Mr. Carp is holding a little fish bowl with the original sized fish in it.  And he says,"Don't ask me how I did it.  But here is your fish."

Mr. Carp not only swoops in and saves the day, BUT he doesn't even share how he did it.

Disappointing.  I wonder if this resolution would sell today.  I tend to think no.

So, be aware when turning to classic literature for story ideas and inspiration, the current trend is to show kids solving their own conflicts.  If we do this, the thought is that we are showing skills necessary for good citizenship.

Examples like I'M BORED by Michael Ian Black, illustrated by Debbie Ridpath Ohi shows a little girl battling the idea that kids are boring.  STUCK by Oliver Jeffers has its protagonist struggling to get his own kite out of a tree at any expense.

Today's protagonists face varied conflicts, yet one thing they all share is imagination, problem-solving, creative thinking and in many cases, success.

Sorry, Cinderella, but you just don't cut it anymore.

Stop by Friday when we continue this discussion with Age Level in the Classics vs. Today.
Posted by Marcie Colleen at 10:44 AM 6 comments:

Word Count: Pay Tribute to the Past, But Write in the Present

We all fell in love with them as a child.  We still love to read them over and over again.  And perhaps we hope to emulate them.

This week we take a look at 3 contrasts between the Picture Books of our childhood and today's market. 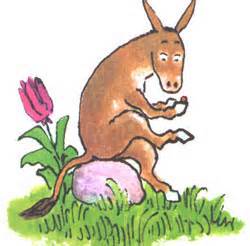 Your favorite pb writer is William Steig?  You want to create a character as unforgettable as Dr. DeSoto or Shrek?  You want to write a story as memorable as Sylvester and the Magic Pebble?

But watch that word count.

The word count for Sylvester and the Magic Pebble is 1425!  By today's standards that is even a tad too high for non-fiction.

By today's standards, we are told by editors and agents, those numbers are sky-rocketly,way too high.

The industry says we should be writing stories that are 300-550 words.

I'm not making this up.  Every conference, every panel, every class I have EVER attended says the same thing.  So why are so many of us fighting it or shocked when someone says it?

The ever-popular Boy + Bot by Ame Dyckman is only 240 words.  Oliver Jeffers' This Moose Belongs to Me is a little longer at 394 words.  Jon Klassen's instant classic I Want my Hat Back is 253 words.  And shockingly, Mo Willem's Knuffle Bunny: A Cautionary Tale is only  211 words!

So even though we have been told that it is ok to write up to 500 words, editors are starting to push even closer to 300-350.

A friend of mine, just recently, submitted a story to her editor which was about 500 words.  He loved the idea.  His request for revision?  "Try to get it down to 300 words."  Ouch!

Some have said that parents are too busy to read longer books to kids at bedtime.  Others have said that kids do not have the attention span in today's hectic, technology-driven world to sit through a longer book.

Whatever the reasoning, the bottomline is that agents and editors say they just can't sell the longer books...and you want to be published, right?

You can pout about it.  You can continue to write longer books hoping to change the trend.  But if you want to be a published  Picture Book Writer in this day and age...you have to get with the program.

Stop by Wednesday when we continue this discussion with Conflict Resolution in the Classics vs. Today.
Posted by Marcie Colleen at 11:06 AM 13 comments: