It's the 4th Friday of the month and that means that my Blogettes guest post is up over at The Picture Book Academy!

Today we are discussing the word "quirky" and what makes a "quirky picture book". http://www.picturebookacademy.com/8/post/2013/07/quirky-with-marcie-colleen.html

Happy Writing!
Posted by Marcie Colleen at 10:23 AM No comments:

What's in a Name?

“What’s in a name? That which we call a rose by any other word would smell as sweet.”
~ William Shakespeare


As the world anxiously awaits to learn the name of Britain’s new heir to the throne, let’s talk about names.
Like expecting parents, writers are constantly in search of names to call their characters.  Names that capture the given personality, time period and overall feel of a character.  It’s not an easy task.  For with every name comes weight, or certain expectations.
Naming a dog Scrappers would paint one picture, while naming him Daniel would offer another.  Scrappers gives the dog a more cartoon, dog-like personality.  While Daniel, infers that the dog might very well be similar to a normal child and act as a kid would in the given circumstances.
A classic name like Anne or Sophia can give a story a timeless quality, while naming the character Brooklyn or Lexi can give the story a modern, hip frame.
Bottom line, names are important and writers take them seriously.
I had been warned.  Writing teachers had often said that names are sometimes changed by editors.  Just like titles, don’t get attached to them.
But here I am.  Faced with changing the name of one of my main characters who I created back in January 2012.  For the past year and a half this character has become a part of me.  We have a relationship.  Can you imagine suddenly being told you have to change the name of your child or a pet after 1 ½ years of life?  Not easy to do.
When I first created this little penguin I assessed his personality (and that personality has only grown bigger and bigger over the years).  He’s a dreamer.  He’s a planner. He’s an outsider.  He’s smart.  He’s resourceful.  He’s a loveable nerd.
I called him Lyle.
Sure, some people had mentioned that Lyle, Lyle Crocodile already existed and therefore it would be a hard sell, but it wasn’t enough people that I was convinced.  So time went by.  Lyle stuck.  And I got attached.
Fast forward to the present.
I now have a fabulous agent (Susan Hawk of The Bent Agency) and we are working on Lyle’s story to prepare it for submissions to publishing houses.  What an exciting time!  However, Susan did bring up the possible issue with the name.  And she’s right.  It would be awful if editors got hung up on the name and passed on it only for that reason.  Changing a name is simple, so why leave it to chance?
But is changing a name easy?  He’s always been Lyle to me.  Any other name doesn’t quite seem to fit…and believe me, I have test driven quite a few.
I reached out yesterday to Deborah Underwood (The Quiet Book, The Loud Book, The Christmas Quiet Book, Part-time Princess).  She had shared a story with me awhile back about a similar situation she went through with her book A Balloon for Isabel.
“A BALLOON FOR ISABEL was initially A BALLOON FOR EMILY. After Greenwillow acquired the manuscript, I turned up a book called EMILY'S BALLOON (by Komako Sakai) during an internet search. I will admit that I was hesitant to bring this to my publisher's attention (although I'm glad I did--it would have been just too confusing to have such similarly-titled books out there). And after I did, they said I needed to change my title. Thus began weeks of brainstorming.
I like the name Isabel very much, but it took me a looooong time to adjust. The manuscript was one that I'd worked on and off for years, so at that point it was like asking a parent to change her four-year-old's name. I'm happy to say that I finally do think of my porcupine as Isabel, but I'm hoping to use the name Emily in another book someday.”
Thanks for sharing, Deborah!
As part of your research, keep up with names that are currently being used.  And definitely stay away from characters who have become larger than life already.  Names like Elmo, Dora, Arthur, Wilbur, Ernie and Clifford already have a huge presence in the life of a child.  And I know that when a child says, “I want a _____ lunchbox,” I don’t want there to a doubt of who that child is talking about.
Funny story, Curious George underwent several name changes.  When he was first created by Margret and H.A. Rey, they were living in France and his name was Fifi.  Sounds odd now, right?  But I am sure it was hard for them to make the change.  Fifi didn’t translate well to American readers, so George was chosen. Yet, in England, publishers felt it was insulting to King George to have a monkey with the same name.  So within that country, readers knew George as Zozo.
As writers we want to give our books and our characters the best possible chance out in the world.  Sometimes that means bowing to word count trends and cutting those lyrical phrases and poetry that do not move the story forward.  Sometimes it means eliminating entire subplots or supporting characters. (In fact, Lyle’s story had a giant banana fight in the ape house which had to be cut and a quirky sidekick named Theo who I painfully “let go” about a year ago.)  And although I have settled on a new name, it wasn’t easy.  But my goal is to be published and I need to make certain changes at times to help that dream become a reality.  As a fellow dreamer, I know Lyle understands.
What about you?  How do you choose your characters’ names?  Have you ever been advised to change a name?  Share your story in the comments below.
Posted by Marcie Colleen at 6:11 PM 11 comments:

We have a WINNER!

Thank you all who entered Marcie's MONSTORE Photo Contest.  And thank you for your patience as we decided a winner.

It wasn't easy, as you were all very creative and fun! 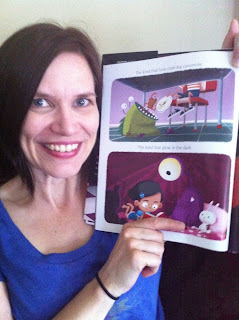 Well...we have made a decision!

Susan said, "If I could buy any monster from @taralazar's Monstore, I'd buy this guy & name him Seymour after his talent ... because he would help me "see more" when I want to read at night. "

Clever name, Susan.  And congrats!  Tara will be emailing  you soon with details on your MONSTORE prize package, including a PB Manuscript Critique.

If you haven't purchased a copy of THE MONSTORE...shame on you!  That's your homework.  :)

Alright, that's it for now.