Boy + Bot : A lesson in simplicity 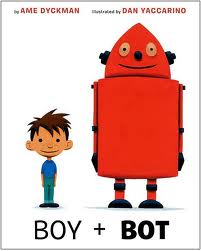 When I first read "Boy + Bot" by Ame Dyckman (illustrator: Dan Yaccarino), I was struck immediately by the sweet simplicity of the story.  Within 240 words, 24 pages Ame and Dan create a whimsical world where a kid can meet a robot while just out gathering pinecones and an instant friendship is born!

So often we are told that, in today's market, stories need to be told in 500 words or less and we rebel.  We make all kinds of excuses and defend why our work is different.  We cling to our 600, 700, even 900+ word manuscripts.  I've been there.  But I also realize that at times I am getting in my own way.

Another thing that strikes me about this story is the amount of story that is told in "pictures only".  Let's face it, Ame was given one of the BEST illustrators for her book and he did an amazing job.  But so much of the story is told in wordless spreads.  Boy affixes a drawing of Bot to the refrigerator; Bot sticks a picture of Boy on his torso. Boy sips chocolate milk from a straw; Bot chugs oil from the nozzle of a can. We are able to see the growth of this friendship without a single word.  It brings to mind the Wild Rumpus spreads of  Sendak's "Where the Wild Things Are".

But as a Picture Book Author, how do you achieve this?

I know some of my readers are friends with Ame...perhaps you can send this link to her and we can have her weigh in.  :)  I would just love to know how those wordless spreads came to be.

Bottomline, "Boy + Bot" is the quintessential picture book for today's market: the simplistic tale of a quirky friendship, the amazing illustrations which enhance the story, the witty humor, the bright colors.  Congrats to Ame and Dan!  I only wish I had written it!  :) 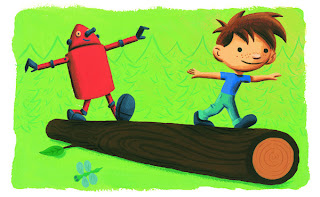