Every year around this time I find myself truly anticipating autumn and all of the delights that come with it.  I want to sip a Pumpkin Latte.  I want to kick the colored leaves on a nippy afternoon stroll through the park.  I want to snuggle up in cozy socks and scarves and hats.

I also anxiously await curling up with a good Picture Book on a blustery day.  Therefore...

Marcie's Top 5 Most Anticipated Picture Books
for Fall Season 2012!
(in no particular order)! Once upon a time, there were three little rascals who thought they were the BIGGEST, BADDEST monsters around. But when they decide to build a huge monster of their own, he isn't exactly what the creatures were expecting. He's happy. He giggles. He's just grateful to be alive. And he has a lesson for his grouchy creators that only takes two little words.

I just LOVE McDonnell's art and his very  sweet style.  I definitely cannot wait to own this story about a very BIG monster showing three very BAD little monsters the power of boundless gratitude. 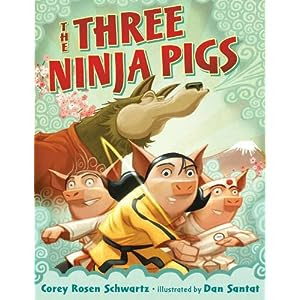 For me this is the MOST ANTICIPATED fractured fairy tale of the year...although Mo Willems might not agree.  When the big bad wolf threatens their village, three pigs sign up for different martial arts lessons to prepare to take him down. Pig One and Pig Two don't stick with their training, though, and are no match for their foe. But after practice and dedication, Pig Three becomes great at karate (including perfecting the perfect pork chop!) and saves the day.

GOLDILOCKS AND THE THREE DINOSAURS by Mo Willems 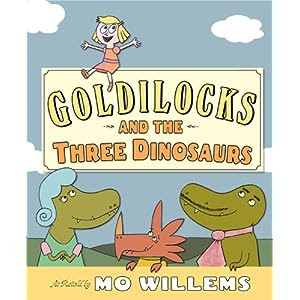 What can I say? I am truly a sucker for Mo and I am really looking forward to his newest book.

"Once upon a time, there were three hungry Dinosaurs: Papa Dinosaur, Mama Dinosaur . . . and a Dinosaur who happened to be visiting from Norway. 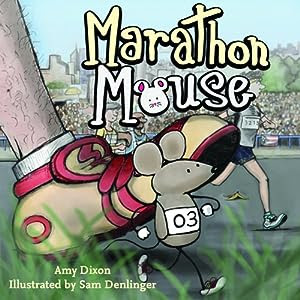 The mice of New York City dread the day of the New York City Marathon more than any other—the crowds, the large shoes, the noise. All of them, that is, except for Preston. He and his family live underneath the starting line on the Verrazano Bridge and every year Preston has dreamed of joining all the other runners in the marathon. This year, Preston is determined to make his dream come true, even though his family tells him that mice are not fit to run marathons. He trains hard leading up to the big day and when the race starts, he successfully dodges sneakers and crosses the finish line, showing his family that mice can do much more than just scurry.

With my own attempt at the NYC Marathon coming up on November 4, 2012, I am hoping to join Preston at that finish line!

Although this book is already out, I am including it here...as I have not had a chance to check it out.

I have taken some classes at NYC's Gotham Writer's Workshop with Michael Leviton.  So I have been eagerly awaiting his debut picture book.

The book comes with a free ghost! But, like any pet, ghosts need special care and attention. A playful riff on "My First Pet" books, My First Ghost teaches kids everything they need to know about taking care of their very own ghost,  offer humorous tips on feeding, grooming, and ghostly games which are complemented by charming illustrations with a retro twist.

Well, there you have it!  I would love to hear what books you eagerly await.  Writers Weigh In!
Posted by Marcie Colleen at 10:47 AM

Email ThisBlogThis!Share to TwitterShare to FacebookShare to Pinterest
Labels: Wednesday Writers Weigh In