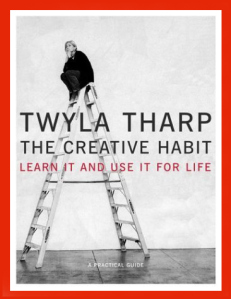 On Monday evening I had the great pleasure of attending a live talk with Tomie DePaola at Pratt.  I was excited, thinking back to the days in my elementary school library when we would all beg to have Strega Nona read to us.  To me, Tomie is a legend.

Throughout the interview he gave insights to his incredible life and career (this includes 250 books, 8 honorary doctorates, and over $15 million in book sales).

Unfortunately, they took some questions from the audience but didn't have time for a lot.  One of my friends who attended with me said, "I wanted to ask him what the key to a long career is."

A long career.  That is what we all want, right?  But what does that mean.

I finally was able to finish Twyla Tharp's "The Creative Habit: Learn It and Use It For Life". In the final chapter, The Long Run, she addresses this idea of a long sustaining career.

"I was 58 years ols when I finally felt like a 'master choreographer'.  The occasion was my 128th ballet.  Why did it take 128 pieces before I felt this way? A better question would be, Why not?  What's wrong with getting better as you get more work under your belt?"

She goes on to state that there is no long run without devotion, commitment, persistence.

"My heroes are the artists whose bodies of work are consistently surprising, consistently fresh.  They all had stunning early triumphs, and they kept getting better through their middle and later years."

Perhaps there is no better example to this than the 8 year career, 13 albums of the Beatles.

Or give Bowie's newest album a listen.  He doesn't disappoint.

But what we need to have this kind of staying power is the devotion to craft.  The commitment to being an artist.  And the persistence to give it a go even when it is not easy.

Its easier said than done.  But the creative habit, having a routine makes this possible.  It feeds us.  Sustains us.

Tharp concludes the book with a story about her company in the days that followed September 11, 2001.

"As the chaos of 9/11 developed, I thought about working with my dancers that day, but decided it was impossible, for so many reasons.  I phoned all of the dancers to check on their welfare, and I told them there was no obligation to attend rehearsal the next day.  Yet they all showed up, ready for work, arriving in a shaken Manhattan, with its bridges and tunnels only just reopened, from Brooklyn, Staten Island, New Jersey and Westchester County to the north.

We could have easily become absorbed by the tragedy, lost in it, and paralyzed by it, but what came back to us was the instinct to dance.  I began as a dancer, and in those days of pain and shock I went back to where I started.  Even in the worst of times, such habits sustain, protect, and, in the most unlikely way, life us up.  I cannot think of a more compelling reason to foster the creative habit."

I finish this book--this series--a very different person than I was.  During Chapter 1, I was frustrated in an overwhelming job and struggling to find 2 minutes to focus on my writing career.  Weeks would go by and I would not have written a word.  I felt dried up.

However, I have had the glorious opportunity to have focused solely on my writing career for the past 3 months--to the day.  (I stopped working at my job on December 21st).  And yes, I was lucky to be able to do this...but it won't last forever.  I am currently interviewing for my next job.

But I have learned how to form a habit of maximizing my minutes and finding the time to write daily. This is something that I treasure and know that I will be able to carry on into my next job.  It just took some stepping back to figure out how to make it all work.  I now realize that I need to write every day.  I need to work on forwarding my writing career to feel alive.  And, like Dorothy Gale, I had the ability to do it all along...but now its a habit.

Posted by Marcie Colleen at 9:35 AM