Put One Foot in Front of the Other

"Setting goals is the first step in turning the invisible into the visible."  ~ Anthony Robbins, American advisor to many leaders.

One of the reasons why I simply do not like New Years resolutions, is that I feel like you are setting yourself up for failure.  We can often visualize these grand gestures of good intentions, but few of us actually take that first step to "turning the invisible into the visible."

Many of us are guilty of the "its in my head, I just haven't written it down yet" syndrome.  But the scary reality is that that's where many great stories begin and end.  Let's make sure we don't fall victim to that in 2012.

I struggled with this as I sat down yesterday to write my first picture book draft for 12x12 in '12.  I had an idea in my head...but I felt frozen when it came down to writing it. 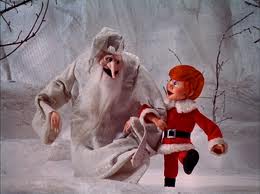 So...how do you make the invisible into the visible?  I can answer that with a quote from another great leader, Kris Kringle.  "Put one foot in front of the other, and soon you'll be walking out the door!"

As a Picture Book writer what does that look like?

1)  Get all of the ideas in your head down on paper...or screen, in many cases.  Take that idea that has been swimming around and get it out.  This doesn't have to be anymore than a brainstorm session or stream of consciousness.

2)  Fill in any other ideas through research or further investigation into your topic.  Do you have enough conflict?  Does your character have enough to do?  Do you have a story arch?  Take as long as you need.  Remember, you might not have a draft yet, but you are taking the steps necessary.

3)  Start putting those "bones" together to create a first draft.  Tbis may take awhile...but you will probably feel yourself build up momentum as you start this process.

Voila!  You are well on your way!  No one said it had to be done in one day.