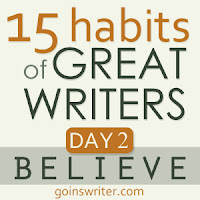 How appropriate that such a song about believing in yourself was written and performed by a group called Journey.  It is a journey.  And it does require "scary hope" (as referenced in Jeff Goins' blog today).

On my personal journey as a writer I often have to remind myself of why I started this journey to begin with.

For years, perhaps even decades, I had often felt strongly that there was a book in me...or two or three.  I would fantasize about book signings and opening up a box of books that I had written.  The problem was that I was not quite sure what that book would be about or what genre I was supposed to write.  But there was a deep longing inside me to be a writer.

In fact, I had many people come up to me throughout my life and say, "You should write a book!"  And my reaction was always, "About what?"  It was frustrating...but not to be ignored.

The point is, I was not a writer, yet...but I believed that I was supposed to be!  I held on to this dream inside me, knowing that someday I would know what to do if I continued to seek.  I had to trust myself...

It was this belief in myself and my desire that finally propelled me into the children's picture book world!  One night, a manuscript just happened.  Suddenly all of the pieces made sense.  The final piece of the puzzle was in place.

It was time to put the belief into action and strat the journey.

Now somedays I falter and I question my dream.  But when I reconnect with that initial desire, longing and belief, I have what I need to move on.

"Don't stop believin'!  Hold on to that feeling!"

Happy Writing!
Posted by Marcie Colleen at 10:38 AM

Email ThisBlogThis!Share to TwitterShare to FacebookShare to Pinterest
Labels: 15 Habits of Great Writers